When you sign up for a reality show, certain things are a given:

You will attract haters on social media.

Strangers will be convinced they know all about your life based off what they see on TV.

Until the show airs, you’ll keep things you filmed secret.

Keeping certain details of your life temporarily under wraps for TV isn’t revolutionary: it makes for great television, and allows viewers at home to enjoy the surprise of a big reveal.

But when I got pregnant during filming, I realized I was in for a massive undertaking. The realization that I’d be keeping my pregnancy secret from social media until the show aired was scary … but a challenge I was equal to.

I resolved that I wasn’t going to stay off social media entirely: I’d just need to get visually creative. If 1950s movie stars could hide pregnancies with strategic coats and oversized bags, so could I!

After people found out I’d been hiding a pregnancy, they were flabbergasted, wanting to know how on earth I did it. I posted on Instagram during my entire pregnancy, getting creative with lighting and props and angles and friends to hide my bump as it progressed. But, believe me, the bigger I grew, the harder it got.

The Aurelia photos will be coming in a flood, here and on Instagram (obviously), but in the meantime, here’s a month by month breakdown of the pregnancy secret, with the behind-the-scenes photos on the left, and the publicly-posted photos on the right: 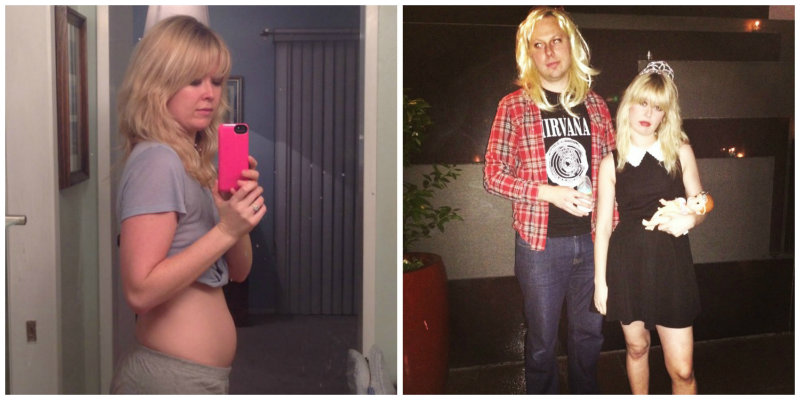 So, for the first few months of your pregnancy, you don’t look pregnant so much as like you ate a really big hamburger. Keeping it secret wouldn’t have been an issue, except I told pretty much everybody I met. “You’d prefer ketchup to mustard, acquaintance at a barbeque? Hey, that’s cool: did I mention that I’m pregnant?” “Yes, I forgot to bring my recyclable bag today, so I’ll take paper, thanks, checkout man. I probably forgot it because I’m pregnant.” [Side note: I don’t understand the cult of silence that goes along with early pregnancy: I know why, I just don’t get it. If the worst had happened, I’d be sharing that with everybody, too. There’s too much silence and shame around miscarriage, especially considering how sadly common it is.] 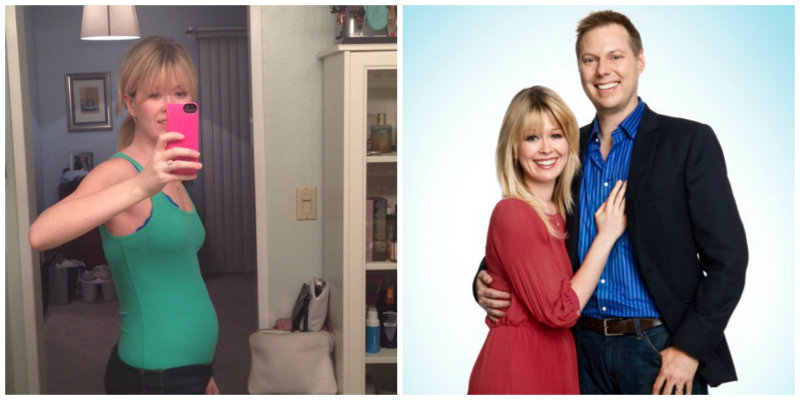 Still not rocking much in the way of a tummy here, but we rushed to shoot my Newlyweds publicity photos before the belly grew. Month two was notable for several glorious reasons: hormonal mood-swings that would make any patient at Bellevue look even-keeled; the burning desire to take as many…selfies…as…possible (a swan song to my former body); a weird taste in my mouth; an aversion to everything but vegetables and pasta; and constipation. Dear god, the constipation. (There should be an entire chapter devoted to this in every baby book.) 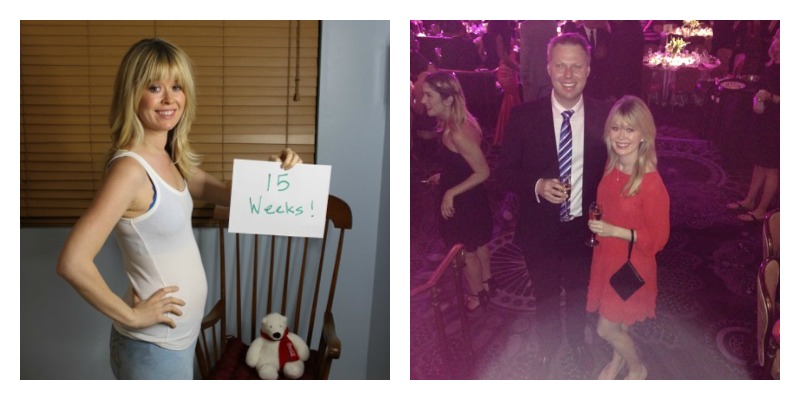 You see that face on the left? That is the face of somebody really, really tired who cannot be bothered with the one-upmanship blackboard-art photoshoots that pregnant women are nowadays expected to take. I was like, “Let’s grab a magic marker and a piece of paper and call it a day. I have couches to go be exhausted on.”

And above on the right, we have the “fit for public consumption” photo. I think it took me twice as long as normal to get ready because I was so damn tired (forget the 3rd trimester: it has nothing on those early days in terms of exhaustion). You’ll notice I am also holding a prop glass of champagne, to throw social media followers off the scent. 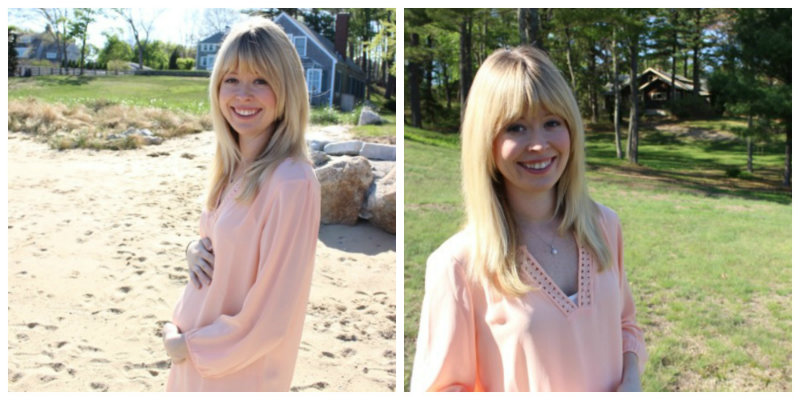 The second trimester is the magical trimester. You finally look a little pregnant, and you’re no longer so exhausted that you want to fall asleep at 6:59pm every night. This trimester is also magical in terms of Playing the Pregnancy Card. Long line for the bathroom? “Excuse me: pregnant lady coming through!” Friends being coy about who gets the last piece of shared appetizer? I need it: for the baby. Husband neglecting you? Hey, those feet aren’t going to rub themselves!

For me, this marked the beginning of having to get creative with photos. My bump was small, but it was there–so I started posting a lot of photos on Instagram from the waist up. 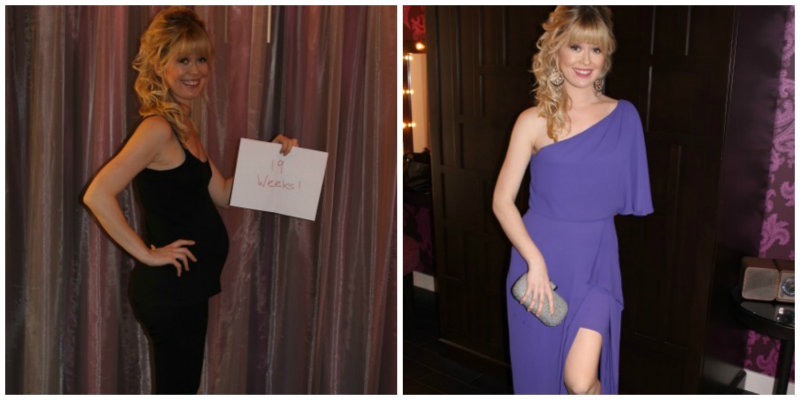 The above two photos were taken on the same day, within a couple hours of each other. I was very proud of that one! 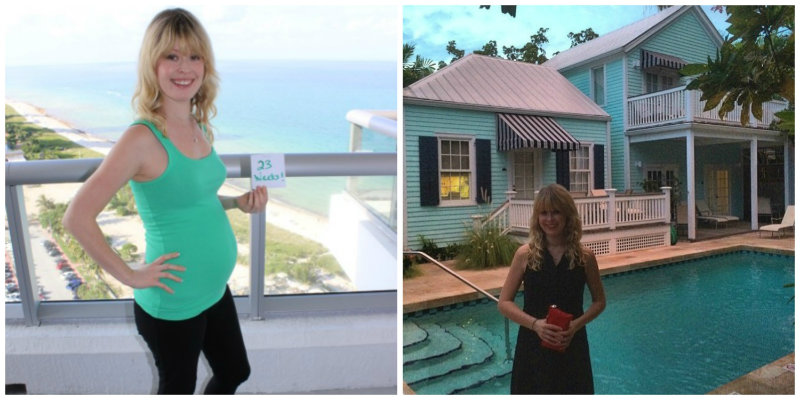 Introducing: props. I started hiding behind things–like my purse, and bad lighting. 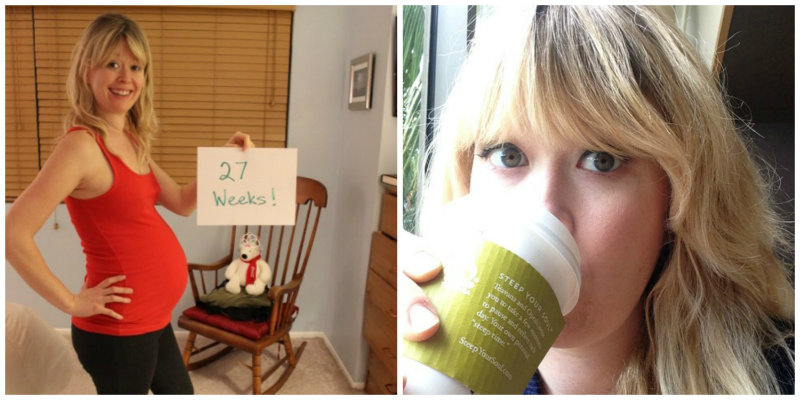 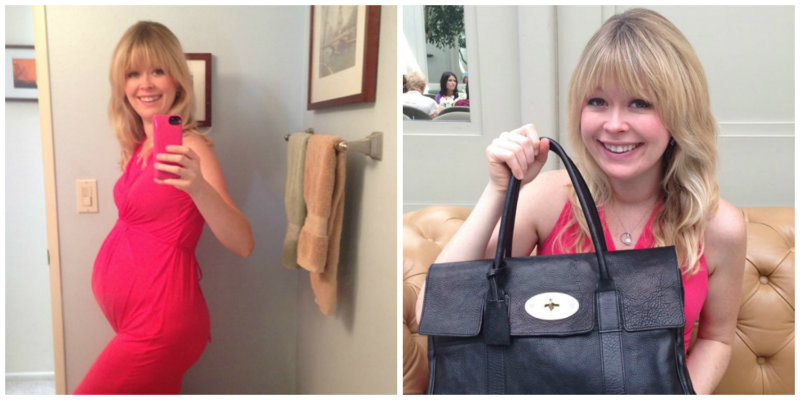 More props! Erik bought me a giant Mulberry bag for my birthday, which was perfect for holding in front of my now-massive tummy for an Instagram photo.

This is when I got fantastically cheesy. Can’t share with you that I’m nearing labor? I’m going to be REALLY SYMBOLIC and HIGHLY METAPHORICAL about the whole thing and put a blog revamp live on my due date, instead! #subtlety 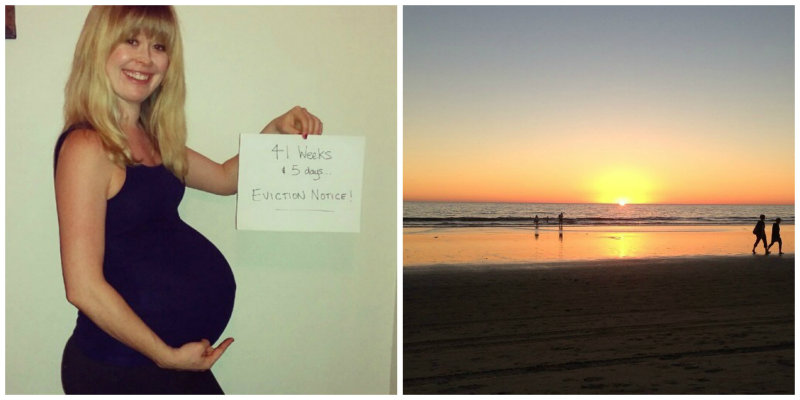 Everybody thinks pregnancies are nine months long, but this is a fat pile of hot stinking garbage. Unless you’re lucky enough to pop that puppy out, say, a week early (fully-cooked at 39 weeks but still smaller than she’d be if remaining checked into Hotel Mommy), you’re closer to 10 months when you deliver. And in my case–since Aurelia was like, “Nah, I’m good. I’m just going to stay put, k?”–I was one day shy of 42 weeks when she finally sauntered into existence.

When you’re 10 months pregnant, there’s no hiding the fact that you look like the Michelin Man. I posted an Instagram photo of the sunset we watched before heading to the hospital, instead.

Yes, it was a weird experience, but looking back, I’m actually grateful for the privacy.

In our society, if you don’t share it, it’s almost as if you didn’t live it – and I’m as guilty of that mentality as anybody.(I’m surprised I haven’t swanned around posting pap smear results and my social security card.) Rather than thinking about my next adorable Facebook baby photo album, I had a few precious months to find my footing as a mother and to work my way through breastfeeding struggles and postpartum depression challenges.(I’ll be blogging about those, too, trust me.) As a result, it was quietly lovely and privately transformative.

As I said yesterday, I’d do the show again in a heartbeat. But keep my next baby secret? No way. I’m sharing that sucker from day one!

And don’t forget to check out my friend Alyssa Kolsky Herzig‘s awesome blog The Sparkly Life. (She’s the beauty director at Brides magazine and an old beauty editor friend from my long ago NYC days.) We chatted about how I kept Aurelia a secret, so read it here. There are a few baby Aurelia photos in her post you haven’t seen yet (because, let’s be real, you’ve barely seen any of them). The floodgates are finally open: huzzah!

@KirstenAlana @mrsoaroundworld Thank you, and glad to hear it! I'm hoping the numbers don't zoom up 2-3 weeks from now. We're all sick of sheltering, obviously, but the alternative is worse.

About 5 hours ago · reply · retweet · favorite